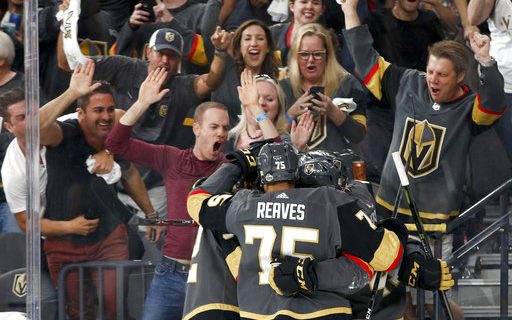 The Vegas Golden Knights are playing for the Stanley Cup. That has some Buffalo fans upset and jealous. (AP Photo/John Locher, File)

The NHL Stanley Cup Finals begin tonight, with the expansion Vegas Golden Knights taking on the Washington Capitals.  Some Buffalo Sabres fans are angered that a team in it’s first year of existence has a chance to win the Cup, while they’ve been waiting 48 years and maybe a lot more.  But Buffalo Sports Page humorist Jeff Wozer has found the top reasons why Sabres fans shouldn’t be jealous.

• Vegas fans have no players to play with during Golden Knights alumni golf tournaments.

• Vegas fans think the Art Ross Trophy is named after that PBS painter guy with the perm, Bob Ross.

• No playoff games to distract our local media from covering skinny teenagers on stationary bikes at NHL Draft Combine.

• Vegas fans think Lady Byng is the stage name of a local stripper.

• No playoff games means no traffic nightmares for the Buffalo Bisons’ 22 fans.

• Due to lack of history even the scratches make countdowns of the Top 30 Greatest Golden Knights players.

It will get better for the Sabres. Jeff is already seeing signs of how the team is making top draft pick Rasmus Dahlin more at home.