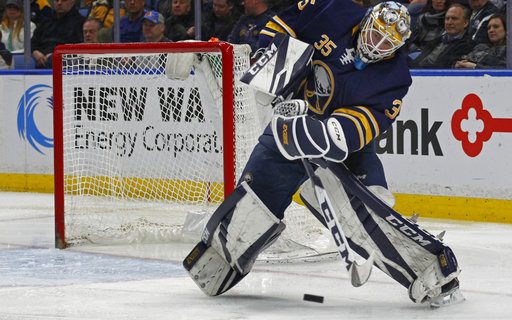 If Buffalo Sabres goalie prospect Linus Ullmark (35) wants to stay in the NHL and not return to AHL Rochster, he should take somne of Jeff Wozer's advice. (AP Photo/Jeffrey T. Barnes)

As the Sabres play out the season, they have already begun to audition some Rochester Americans players like Linus Ullmark and Justin Bailey.  While they have to play well and produce with the big club, sports comedian Jeff Wozer also found some ways that those prospects could face a quick trip back down the Thruway.

• During game instead of a water bottle drinks out of a growler.

• On first shift instead of a hockey stick carries a selfie stick.

• On team flight had to be reminded not once but twice to switch cell phone to airplane mode.

• Uses popular Ask Marty segment to ask if any of the Pegula daughters are single.

For more funny stuff from Jeff, check out his takes on O.J. Simpson’s Interview