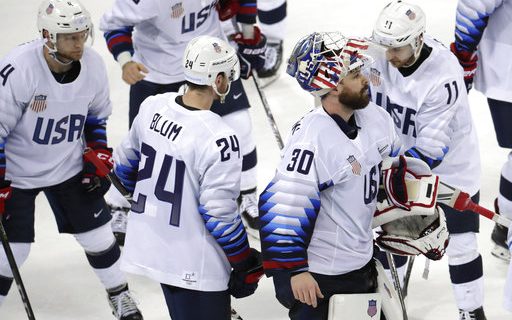 The United States athletes react after the preliminary round of the men's hockey game against the team from Russia at the 2018 Winter Olympics in Gangneung, South Korea, Saturday, Feb. 17, 2018. Olympic Athletes from Russia won 4-0. (AP Photo/Julio Cortez)

The non-NHL stars staffed USA Olympic hockey team has a lot to overcome to win a medal in Pyeonghang.  But sports comedian Jeff Wozer has also discovered that they may have to deal with some referees who are biased against the USA.  Here are the top signs that Team USA’s games are being officiated by a biased referee.

• Penalizes the US for too many Yankee imperialists on the ice.

• Wept openly as a child when Rocky defeated the communist boxer, Ivan Drago.

• He’s married to the fat lady who sings.

• Can cash his Olympic referee paychecks at any North Korean M & T bank without proper ID.

• Under the cloak of night launches bottle rockets towards US hockey team’s dorm room.

• Refers to the “Miracle on Ice” as the “Nightmare on Ice.”

• On disputed goals tells Americans to take it up with Judge Judy.

• US players can’t exit the penalty box until they post bail.